Douglas’ early history dates back hundreds of years to the 1500’s and the early Spanish explorers. Cabeza de Vaca established a route from Mexico during the period of 1535-1536.

The region was also part of Nueva España during the 1700’s and an early presidio was located just east of present day Douglas. The San Bernardino Presidio was just one of the presidios established during that period. The now famous San Bernardino Ranch and Wildlife Refuge was part of that original settlement.

In 1878, the Company C of the US Cavalry was sent to the region as part of the Apache Indian Campaign and to address the activity of Geronimo and the band of Apaches. Geronimo surrendered to General Miles in the Sierra Madre Mountains in Northern Mexico in 1886.

The early 1900’s brought new recognition to this area when Phelps Dodge selected the Douglas area as a suitable site for its copper smelting activity. Bisbee’s copper mining operations were developing quickly and the company needed an area for a reduction works facility. Developers quickly took steps to establish a city, installing electricity and phone lines and other basic needs to meet the needs of a rapidly growing city. The influence of copper mining was significant for several decades until the smelter ceased operations in 1987 and the one of the city’s most recognizable landmarks, the smelter’s smokestacks, were dismantled.

The city has a rich military history dating back to the 1800’s and the US Cavalry, Buffalo Soldiers and Camp Harry J Jones. Camp Harry J Jones was established in 1911 to deal with border troubles during the Mexican Revolution and remained an important part of the area for more than 20 years.

The city’s bustling economy provided opportunities for many. The city was thriving and Douglas became a gathering place for the people who worked the copper smelters and who farmed and ranched in the valley. At one time, Douglas was home to more than 13 movie theaters. The most famous and the only building remaining today is the Grand Theater. The Beaux Arts style building was considered one of the most deluxe entertainment venues in the Southwest and played host to vaudeville performers and other entertainment legends in its heyday. 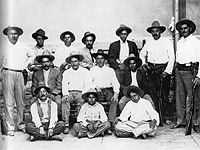